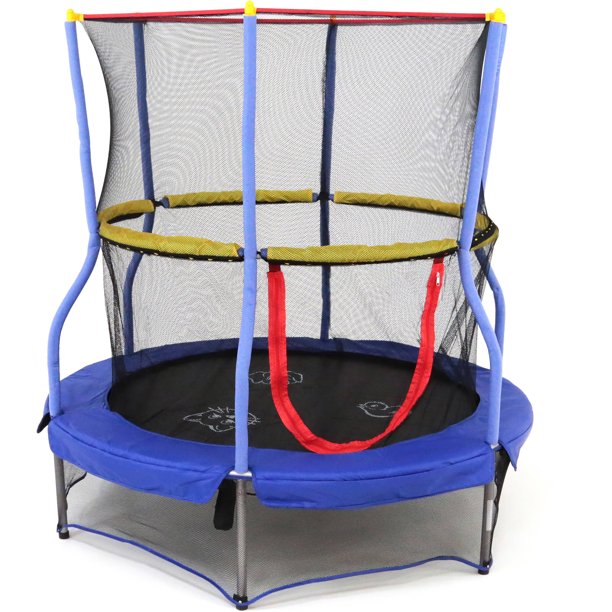 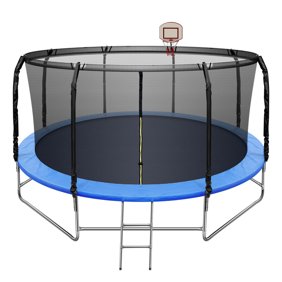 great for my 3 toddlers

This was a Christmas gift for my son who is 4.5 with Autism, we paid for next day delivery and it arrived exactly on xmas eve. He loves to hear the animal sounds and uses it every day.This trampoline fits great in our playroom since its winter we have it indoor but all 3 of our children love it! !!

The trampoline is awesome!! I purchase this for my one and three year olds and they love it, I love it!! the instructions were simple and it didnt take very long to put it up. all in all I am very pleased and very satisfied with this purchase!!

I love this ! Bought it for my 3 year old twins. It's big enough for both of them to jump without bumping into eachother. You really do need a electric screw drill though. But it's definitely worth the buy !!

Best trampoline for toddler yet!

Perfect for your toddler!!! I have nothing but good things to say about the trampoline. Big yet small...it doesn't take up too much space. The ONLY con--putting it together. It took longer than what expected. Great product for the money!

If you would like to share feedback with us about pricing, delivery or other customer service issues, please contact customer service directly.
1-3 of 55 questions
by LoveKy78December 7, 2011

1. I see that everyone is saying not to exceed over 100lbs so I am thinking if your two children are not over 100lbs they should be ok
by MsRed69
Helpful?
2. I would say yes. My girls are 3.5 yrs & 20 months and they have plenty of room. I am venturing to guess that your girls could jump together with no problem.
by RachBak
Helpful?
3. It would be likely that they would bump into each other. My three year old jumps alone in it. I can't imagine another child in it with her but she goes a little crazy in it. ;-)
by kaylieandmacy
Helpful?
4. My graddaughter is 6yrs old and her weight is 40lbs, it is only safe for her to bounce on it.
by hunters5
Helpful?
5. I would not recommend it.
by GrandmotherGG
Helpful?
6. yes, i believe it is large enough for 2 small girls.
by junelovebug
Helpful?
7. Yes - only if they are toddlers. I would not recommend it for a 4 and 5 year old to bounce at the same time.
by beba5860
Helpful?
8. I wouldn't suggests putting more than one child in at a time.
by 1sirshopalot
Helpful?
9. Hi LoveKy78, I think it is big enough for 2 to be in at one time but I would not recomend both jumping at once because they could get hurt. By the way I too love KY. I am from KY and graduated in 78.
by cynthia6515
Helpful?
10. 3 kids did not stop jumping in it since Christmas eve until now. sometimes one of them falls but the other 2 kids were alert immediately and did not step on her her.
by Geddo
Helpful?
11. not enough space for two kids, if they do they most be careful not to bump with eachother
by Lulu7311
Helpful?
12. Absolutely not
by Spitfiresmom
Helpful?
13. i would suggest one at time
by barbwire55
Helpful?
14. no
by asdfar124
Helpful?
15. We recommend only one jumper at a time weighing no more than 100 lbs.
by Skywalker CustomerService
Helpful?
15 Answers

1. Yes absolutely. The encloser bars and netting are easy to put together. Just 6 screws, and the netting is already attatched to the jumping pad on the trampoline, so you just have to pop the caps on the top of the enclosure and loop the loops on them on the netting. theres only 6 loops. You can fit the trampoline through doorways on its side, and thats the hardest part to put together, and that wasnt too difficult as it was. As far as the two kids, they could yes. If they were small and both weights didnt go over that 100 pound weight limit. Its better with 1 kid in, but ive had both mine in it, and its fine. Its bigger than it looks. I actually thought it would be smaller. hope that helps.
by Isabellae
Helpful?
2. You have to remove about 6 screws to be able to move this through doorways. And yes, two small kids can jump at it at the same time.
by kaylieandmacy
Helpful?
3. Yes, you can undo the vertical bars and netting and then move it. It is very easy to put back together from that point. Two kids can fit at one time, just pay attention to the weight limit. It is not springs, it is stretch bands, so I wouldn't go over the total weight limit.
by Annie717
Helpful?
4. yes it can but the netting is attached to the mat so it cant stay off but can come off for easy transfer in and out of house for sure.
by hunters5
Helpful?
5. yes they are easy to unscrew and remove, then refit. we had it in living room, then moved it to a covered deck.
by junelovebug
Helpful?
6. No. It isn't easily done. I LOVE this but have found this to be the only drawback. If you have a place to keep it inside all winter and move it outside for the summer, moving it twice a year shldn't be a deal breaker. My problem is that I have my granddaughter 3-4days/week&it won't even fit out a sliding glass door. All 6 enclosure poles have to be unscrewed and removed; in so doing, the round 'handle bar' falls apart. So twice a year, fine. More often-total pain. And yes, 2 small kids will fit fine.
by 1HappyGrammy
Helpful?
7. Yes - it should not be a problem.
by beba5860
Helpful?
8. You could disassemble the unit and put it back together, but it would take some effort.Not only would you need to disconnect the bars from the trampoline but I think you would also need to break down the bars to get it out the door.
by cynthia6515
Helpful?
9. Answer to both of your question is yes.
by airmedic
Helpful?
10. It's easy to break down for moving, 6 screws should be enough.
by bbhot123
Helpful?
11. After assembly. It will be a real pain. Absolutely at no time should u have two children in at the same time.
by Spitfiresmom
Helpful?
12. you have to remove the screws so yes you can remove the bars with some effort .. I suggest one at a time however if the kids are small and are simply moving from sound to sound there would be room for 2.
by barbwire55
Helpful?
13. The net is attached to the part you jump on. but the bars can be removed it's just one screw per bar. I would not suggest this go outside. It wouldn't hold up.
by asdfar124
Helpful?
14. The enclosure poles can be unscrewed from the base for easier an move. The unit is an indoor trampoline and it is not recommend for the trampoline to be left outdoors for a prolong period of time. We recommend no more than one user at a time inside the trampoline and for the user to be under 100 lbs.
by Skywalker CustomerService
Helpful?
14 Answers