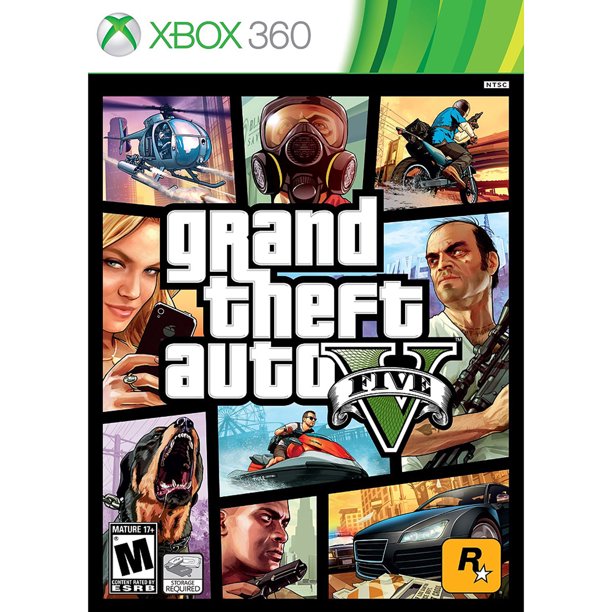 We aim to show you accurate product information. Manufacturers, suppliers and others provide what you see here, and we have not verified it.

Developed by series creator Rockstar North, Grand Theft Auto V is the largest and most ambitious title in the series to date. Grand Theft Auto V delivers a world of unprecedented scale and detail bursting with life, from mountaintops to the depths of the ocean. Los Santos: a sprawling sun-soaked metropolis full of self-help gurus, starlets and fading celebrities, once the envy of the Western world, now struggling to stay afloat in an era of economic uncertainty and cheap reality TV. Amidst the turmoil, three very different criminals plot their own chances of survival and success: Franklin, a former street gangster, now looking for real opportunities and serious money; Michael, a professional ex-con whose retirement is a lot less rosy than he hoped it would be; and Trevor, a violent maniac driven by the chance of a cheap high and the next big score. Running out of options, the crew risks everything in a series of daring and dangerous heists that could set them up for life.

WARNING: This product contains chemicals known to the State of California to cause cancer andbirth defects or other reproductive harm.

Son is very happy with the game. It was a trade off to get rid of another game that isnt even suitable for 15 year olds but his father didnt care. Came well packaged and early. Very pleased with service today

Gran Theft Auto V exceeded my expectations! Driving fast cars and drifting corners has improved by driving performance, and planes are finally back to Grand Theft Auto! I love the new features such as, switching from one character to another at any time off story, different special abilities for all characters, and the stock market! Overall this game exceeds my expectations and the only way for someone to love this game is to play it!

Definitely worth the playthrough.

I purchased it on a whim sale in December, not really sure of what to expect. Definitely worth the buy. It plays pretty well on xBox 360 (non-slim) with very little lag. The story is great, and full of psychotic comedy and hilarious moments. They finally managed to fix the driving too. No more accelerating into a brick wall because you sneezed on the control stick. Granted, the cops will still shoot at you if you so much as bump into one on the street (seriously, you could shoot somebody in the middle of nowhere with no witnesses, no sound escape, and no possibility of ever being caught, then shortly thereafter be run over by a cop car or landed on by a police helicopter). You'll seriously enjoy robbing everything from high-end stores to mini-marts to people on the street. Steal cars, blow up everything in sight, and be a general public nuisance. It's all yours to enjoy!

Grand Theft Auto V - Xbox 360 is a very good game that has tons of content within it. The area that you can explore within the game is larger than all the other previous Grand Theft Auto games combined. The game centers around three characters Michael, Trevor, and Franklin. The game allows you to eventually jump between the characters and do missions that are exclusively tied to that character's storyline. The game is dense and looks beautiful. You will definitely get your money's worth with this game. You can probably put in over a 100 hours of gameplay if you want to. There is so much that you can do within the game, for example you can go to a movie theater within the game and watch a short movie about a british robot who curses. There are tons of missions that you can do and I feel if you liked the previous GTA games you will love this one. Thank you for reading my review, if you have any questions feel free to email me, I would be happy to help you with any questions you have.

I instantly became addicted to playing GTA 5! The graphics are really nice and I like the story line. I bought this game for the Online Gaming aspect- and was not disappointed! I would warn anyone who wants to buy this game to check your available space on your memory unit/ flash drive. This game take 8GB's alone just to download (it comes with a download disk and a game play disk, you have to download the game one time before you can play) and it also recommends you have 8GBs of free space to run the game. I own a 4GB Xbox 360 so I went out and purchased a 32GB San-disk Flash drive and had no problems installing and playing the game! The only downside is that if you want to play Online, you have to download a bunch of updates which takes up a few gigabits of additional space. If you do not apply these updates, you can't play online.

Bought for my niece

I got this game for my niece for Christmas. I had asked my sister if anyone had bought it for her already as she really wanted it and she thankfully said no. It's got some mature content but that's written on the package itself so no complaints. It is as expected and hilarious to play.

Busted case when I received it.

The case was busted when this arrived. Luckily the discs weren't damaged.

Arrived in Payless Daily bubble shipping package with a completely crushed and falling apart xbox disk case, one disk is broken and unplayable the other is totally fine. But both disks are needed to play the game.

HEAD OF HOUSEHOLD AND ALL PURCHASES FOR OUR FAMIL

Very, VERY DISSAPOINTED. The game came today, my 10 yr old son WAS SO EXCITED he was actually jumping up and down crying tears of happiness. THE GAME DOES NOT WORK, IT WAS GREAT AT PROVIDING ME STATUS CODES AS TO THE PROBLEM, WHATEVER THEY MEAN AND ALSO STATED THE DISC IS UNREADABLE. I had him check another game on his xbox 360, they all work so it's NOT OUR SYSTEM. I am disappointed and UPSET as I put alot of time and effort into this purchas as well as many others. I am sick of returning things FROM WALMART. VERY VERY DISSAPOINTED IN WALMART. THE QUALITY IS NOT THERE ANYMORE.

If you would like to share feedback with us about pricing, delivery or other customer service issues, please contact customer service directly.
1-3 of 30 questions
by SpazzDecember 30, 2013

1. You can use any usb flash drive just plug it into your 360 and format the flash drive to use on 360 and it's good to go!
by ghstrdr230
Helpful?
2. I had to buy a 16gb for the Xbox specifically had to take bake the other one that i had bought
by AimzW
Helpful?
3. At least a 8GB flash drive for xbox they have it at Payless Daily for $28.00
by Chelly82
Helpful?
4. My son said to try to download straight to the hard drive...you will need at least 7gb to do it.
by tambtch
Helpful?
5. Go into the options settings on you Xbox and go into storage settings than go into the flash drive options and select format
by D0MIN082
Helpful?
6. No, any flash drive should work
by Schliep96
Helpful?
6 Answers

1. No and any one under about 15teen shoukd play too much cursong n sum nudity shown
by LadySaDiddy
Helpful?
2. sorry no. but you should still buy it
by mrpikmin3
Helpful?
3. Not as far as i know but i know you have to be 18 to buy it and i believe 18 to play it on xbox live but not positive on that one but if your a parent i would assume any good parent that don't want their kid to play this game would not leave the game laying around for them to play it.
by ghstrdr230
Helpful?
4. No the game just comes as is. With swearing,blood and violence
by Exodius316
Helpful?
5. No, that is in part why it has an M rating.
by Paddfoot
Helpful?
6. No.
by Sharpcrease
Helpful?
6 Answers

1. yes you can. you have to by a bigger hard drive because GTA V needs atleast 8gb of memory in order to be played. I believe you have the Kinect that comes standard 4gb. you can by a bigger hard drive at Payless Daily, gamestop, best buy, etc. I honestly prefer ebay because they tend to have cheaper everything lol
by dabossofbosses
Helpful?
2. I had the same problem. I have a 4GB Hard drive Xbox, and the game requires 8GB to play. what I did was bought a regular Sandisk flash drive (32GB) from walmart. You plug it in on any of the flash drive ports and the xbox will configure it and boom, there ya go. The game will ask you which memory to add it too, just make sure to add it to the one that has the picture of a flash drive everytime you save.
by gorilaz
Helpful?
3. yes you can go out and buy a 16gb flash drive and plug it into one of the usb port or you can buy the 320gb hard drive if you have a slim
by TheVideoGamer
Helpful?
4. just get some 64gb usb flash drive's or i think even a big external usb hard drive would work aslong as you format it for xbox use once you plug it into your xbox
by ghstrdr230
Helpful?
5. Go into the XBOX home page, go to storage & delete stuff you don't need to get more storage or get a 7 gb or higher flash drive .
by tambtch
Helpful?
6. Yes you can buy an external hard drive or a large capacity flash drive. I purchased a 32GB flash drive to run and play this game on and I've had no problems.
by megdizzle
Helpful?
6 Answers