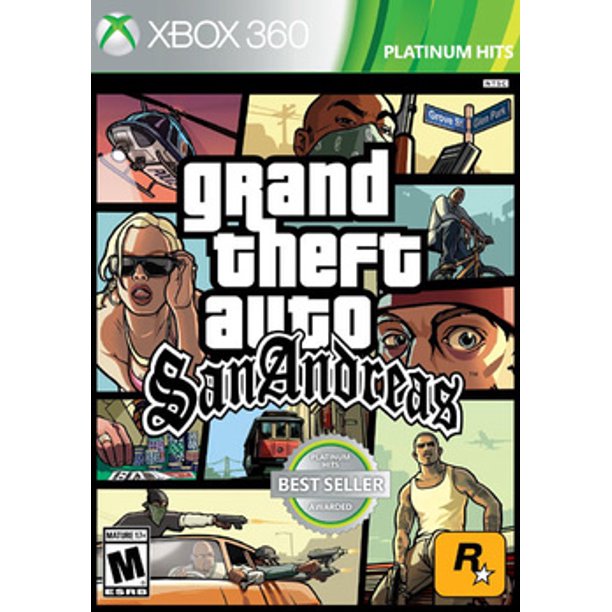 We aim to show you accurate product information. Manufacturers, suppliers and others provide what you see here, and we have not verified it.

Five years ago, Carl Johnson escaped from the pressures of life in Los Santos, San Andreas, a city tearing itself apart with gang trouble, drugs and corruption. Where filmstars and millionaires do their best to avoid the dealers and gangbangers.

Excellent price. Surprised it was in stock.

I love this game

I love this game ive been looking for it for years

excellent my son loves it

Blast from the Past with cool graphics

This was a gift for my son. He enjoys playing it very much. He used to have it on PlayStation 2 and was happy to have it on XBOX 360. They graphics a new and improved on this platform.

I upgraded my original PS2 copy of this game to the Xbox 360 version (my copy comes in an Xbox One-style case, which is pictured) to play on my Xbox One. The game plays well for the most part. The game looks good on my HDTV and the graphics have been improved. The autosave feature (which activates after completing a mission or backing out of a racing tournament) is a welcome new feature. However, there are some new issues left unfixed by the developers of this version: 1. If you play for too long, the screen starts glitching. Quitting the game and relaunching it fixed this issue for me. 2. The audio sometimes cuts out in cutscenes. 3. All of the radio songs were converted from stereo to mono (except for "Green Onions" on Master Sounds 98.3, which was recorded in mono). 4. Speaking of the radio songs, some of them had to be removed due to licensing issues. 5. There is a checkpoint system too, but sometimes it works, sometimes it doesn't. I recommend this version to anyone who always wanted an HD remaster of this 2004 classic. Just be aware of those issues I mentioned.

Brought this as a Christmas gift and my son played the whole time he was on break.

Retro/throw-back, not what we expected. Payless Daily was quick, easy and affordable!

If you don't mind the jittery game engine, audio cut-offs and lack of 2 player then it's still a nice nostalgic play. I just don't understand why they would take 2 player out, and it makes me wonder if there is anything else missing. Can't compare the graphics of the 2 right now but they don't look like they would be any better than the original.

About our prices
We're committed to providing low prices every day, on everything. So if you find a current lower price from an online retailer on an identical, in-stock product, tell us and we'll match it. See more details atOnline Price Match.
Related Pages :
webapp branch
paylessdailyonline.com
Customer Service
In The Spotlight
© Payless Daily. Payless Daily IncTo ensure we are able to help you as best we can, please include your reference number:
Thank you for signing up!