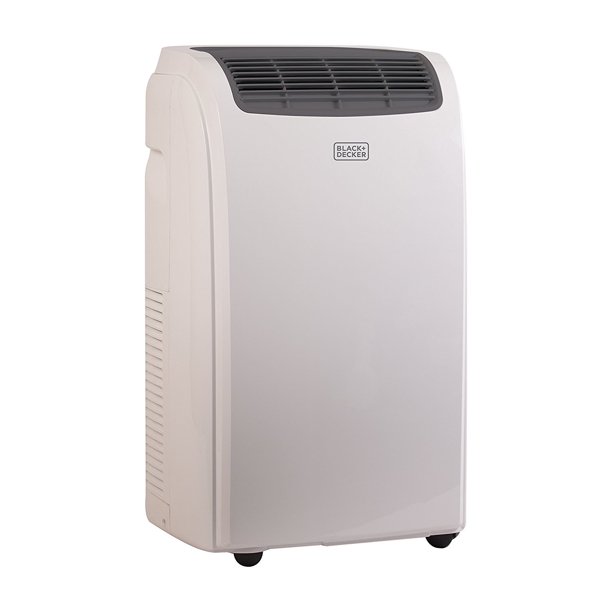 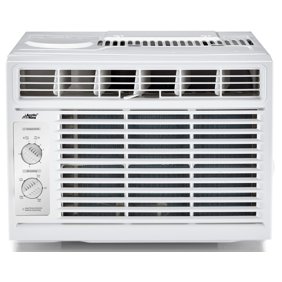 We aim to show you accurate product information. Manufacturers, suppliers and others provide what you see here, and we have not verified it.
Enjoy a comfortable home climate with this versatile BLACK+DECKER unit. It cools, dehumidifies, and circulates air to stand up to summer heat. Offering immediate, uninterrupted comfort, this Portable Air Conditioner features easy-to-use electronic controls and is quiet while you sleep. This unit comes with rolling castors and side carrying handles for easy-to maneuver mobile comfort and everything needed for an effortless installation.

The best portable air conditioner in the world

I give it a five star because it met my individual needs. I have a small detached room that is 110 square feet and I needed a unit. I did a lot of research and ended up with this one. I don't know if it can handle a much larger room to be honest. Pros: - Brand name - Good price - Not too big - Remote control - No water pan to drain in AC mode - Easy set up (had to cut one of the window panels as described in the instructions and it was not that big of a deal) Things to consider: - Somewhat loud - if I am on a video conference call I just turn it off - Needs to be near a window and cannot go flush against a wall - The "low" fan setting is still pretty strong - Heavy - you might need assistance moving it and installing it if you are going up stairs or are small in stature

Made a dent in the southeast Texas heat. August is hot in Texas and my older central air could not keep up this year. This unit has been running for a few hours now Supplementing my central 3.5 ton unit In my old 1930's two story house and its 70 degrees upstairs at 10pm and its 85 degrees outside. Last night without this new unit it would take until 4 am to cool to The 1000 sq ft upstairs to 70. I win!!!! I may have to turn it down!

I cannot express how much I love this thing. The house I live in doesn't have AC, and I live in southern Virginia. Walking upstairs to my bed room was like walking into an oven, then I walked into my bedroom and it was like I walked into a kiln... would look to my left and see some third graders clay art getting glazed and what not. Imagine sleeping in a room where Mrs. Finster hardens student pottery projects... so I went onto amazon and found this b-e-a-U-ti-ful appliance from the future! It cools my (10×12) room to 70° in about 8-9 minutes, fairly quiet and is not taxing on the electric bill! Assembly is simple, and takes about 5-10 minutes. The seal on the tube connecting to the window plate could be a little tighter. I haven't had to drain the drip pan yet, but this is supposed to blow the moisture out the pipe, so it isn't supposed to be gathering in the drip pan. Overall I love this product; it does its job well and looks good doing it, no complaints, no issues and is easy to maintain. I highly recommend buying this product. P.S. The instructions say that if the product is delivered horizontally, you need to set up standing up for 24 hours before using.

Nice unit for a smaller home or larger room

It is a nice unit. I have a 65 foot mobile home and this until keeps it pretty comfortable. I find that using the dehumidifier is better if it is raining and/or humid. Sometimes the humidity is the factor, not the actual temperature. I dont let my home get above 72, so if it begins to climb past that while using dehumidifier, then I switch it to AC. So far so good and this is with it being in the low 90s. I am happy with mine, It just takes a little figuring it out based on your heat/humidity. I wouldnt recommend it for a big house, but for a small house like mine, or a large living room, it is great.

I bought this unit last year 2nd summer in use. Cools well and fan is quiet. Used in a small apartment where I can't go over 10,000 btus. Had to write a review because the only other review is inaccurate. Manual says to set the temp to celsius not fahrenheit, the lowest setting for fahrenheit is 64. Ideal to cool a small room, I use it in my bedroom and sleep great.

This mini AC does the trick in my small studio. Easy to install. It also comes with a window panel kit that accommodates extra-wide frames, unlike other mini AC models.

So far so good!

Strong unit, very happy with it so far. Have it in a 10x12 room and it easily cools the space. Only downside is window vent not the easiest to install.

One man's quiet is another man's loud.

Three stars because it works. It emits remarkably cold air from switch on. But, it's noisy. I read reviews on other websites where users describe the unit as 'quiet'. I bought this to cool my 300 sq ft apartment, and I find it too noisy for the space. On the Low setting, the unit itself generates about as much noise as a fan on High. But, its exhaust setup sounds like a dryer vent. But, noise isn't the reason I docked two stars, but rather its installation. The vent setup isn't 1-2-3. The window kit consists of three panels: the vent panel plus two extensions. All three measure 20.5 inches in length. My window width measures 24 inches, so the vent panel alone is too short. But if I add the extension, the setup becomes much too long (it covers the vent opening). The manual casually mentions the possible need to modify the panels as if one can cut it to size with a pair of scissors. However, the panels are constructed from very heavy plastic, and common non-electric cutting tools won't do. It's such an odd setup, that I wonder if I received the correct pieces. Regrettably, I think I must return it.